You can find a German version of this interview under the following link: Go, Go, Power Rangers! PR: UK im Interview

The one or other might have met them already at an event. Others would like to meet them: We are talking about PR: UK, a cosplaying group which portrays the whole Team of the Mighty Morphin‘ Power Rangers. In this interview we talked about how this team came together, at which events you can meet them and what the general reactions are when they meet Power Rangers fans.

Please introduce yourself shortly and in your own words for those who don’t already know you.

We are a Power Ranger Cosplaying group with a full team of all 6 power rangers, he first group of it’s kind in the UK. We appear at cons and events throughout the UK to put smiles on people’s faces while also raising money for charity.

You basically cosplay the whole Mighty Morphin Power Rangers team. Was that a coincidence or did you as a group decide that this would be a perfect cosplaying adventure?

The fact that we cosplay as the Mighty Morphin Power Rangers is part plan and part coincidence. All of the group members have known each other for years (long before we formed PRUK) we all had similar interests and Power Ranger Cosplaying happened to be one of them. We all had suits from various seasons and by coincidence mostly had a full MMPR with the exception of pink when we first formed. Got that ordered and the rest was history. 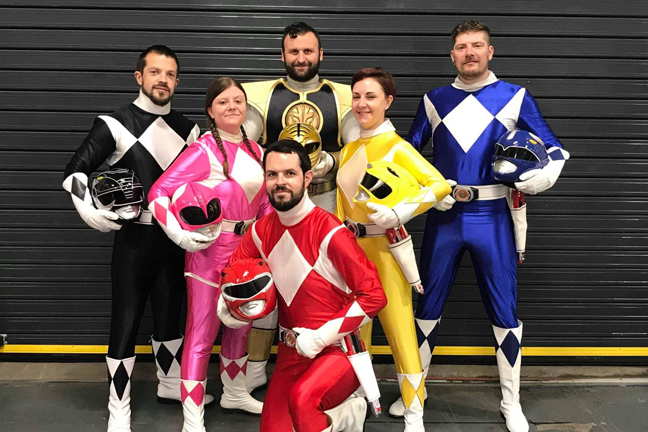 In Germany Power Rangers is mostly made fun of and/or it is criticised for being violent (monsters and fight scenes!). Luckily this has currently been changing. What is the situation in the UK like and what kind of reactions do you get as a Power Rangers cosplaying group? How do you handle the situation?

Power Rangers is extremely popular in the UK still. It has been a constant on TV and in toy stores since 1993. When it first aired back in the 90s there was a lot of resistance from parents for the „violent“ nature of the show but in reality the same could be said for any other TV shows and films at the time.

What is the reaction you usually get at conventions? And is it more the kids that enjoy meeting you or the generation that grew up with the original group of the Power Rangers?

Whenever we are at a con, we are always extremely popular. People love meeting their heroes and meeting „the Power Rangers“ is no different. Some children stare at us in awe, some get giddy with excitement, some get incredibly shy and in some cases scared (not being able to see someone’s face can be daunting for young ones) but usually we are lost popular with adults! Saying things like omg you were my childhood, I use to watch you on TV every Saturday morning with my toys and asking for hugs. Those with children tell their kids that these guys were MY Power Rangers / Are THEE Power Rangers, while they know we are just cosplayers they associate us with their fond childhood memories. We all love and follow the franchise so it’s great to hear, we love talking to the younger fans about the current seasons that they love to watch. We also enjoy talking to the adults about Super Sentai, the more mature Japanese show that Power Rangers is adapted from.

The group came about through us all being friends and knowing each other for many years prior to the groups official formation. We have many common interests and hung out, not just at cons. So we are a friendship group first, actually more like a family, and a ranger cosplay group second, so we generally don’t accept new members.

We are on both Instagram: pr.uk And Facebook: PR:UK We also encourage people who snap pics with us at cons to tag us and hashtag them #PRUK

Which are going to be the next events for you and what kind of events do you usually appear at?

Monoploy Events have contacted us regarding another appearance at Liverpool Comic Con in 2020. We only do comic cons and occasionally charity events. (Alhough we collect for a charity at every convention we are guests at) we have been contacted several times regarding birthday parties and things of that nature, unfortunately with our members being based all around the UK (Wales, London, Southampton, Kettering) it just isn’t feasible as we all also have full time jobs.

Über Beyond the Show